Take a spoonful of sweet white blancmange, savor the firm espresso jelly, and enjoy a wave of chocolate Bavarian cream spreading across your palate! Within the fluffy texture on your tongue comes a surprisingly rich bitterness of chocolate. But the sweet creamy flavor gently returns, leaving you with a taste that melts in your mouth as you take your last bite. Don’t take this lightly. This is no ordinary dessert.

Chocolate from Brazil began to arrive at Miho Museum's confectionery kitchen in 2012. This chocolate is produced in the Tome-Acu region, which is known for its agroforestry farming practices. Among some experts, Tome-Acu chocolate is of the highest quality. Here unfolds a drama…

Tome-Acu is home to many Japanese immigrants and an area that flourished in the 1920s with pepper cultivation. However, several decades later, the pepper crops were destroyed by disease and the farmers fell into extremely difficult times. Then, one farmer looked at the indigenous people of the Amazon and wondered how it was that they could live so peacefully. A closer look revealed they established a lifestyle in which they cultivated various crops around their homes so that “even if one crop goes bad, as long as the rest are doing well, there is no problem.” Eventually, he grew various plants—bananas, cacao, pepper, fruits, and mahogany for timber, and switched to a farming method in which he received the bounty of the harvest while reviving the forest. As the crops grew abundant, the birds and insects returned to the regenerated forest.

Cacao cultivation based on the Shumei Natural Agriculture farming method that is fertilizer and chemical-free has started in the Tome-Acu region. Our restaurant uses chocolate and peppers grown in Tome-Acu; perhaps in time to come, we may even get different kinds of fruit from there too! 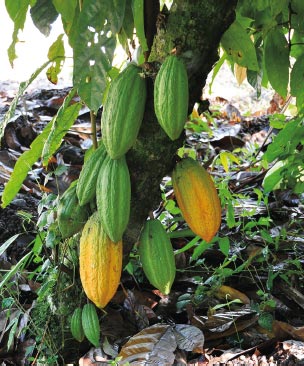 Now, let’s get back to the chocolate babaloa. The balance of the three layers is the deciding factor of this delicious dessert. Because products from the same area are said to be compatible, when the espresso jelly in the second layer, made from Brazilian coffee beans, is made to be the same soft texture as the Bavarian cream, the espresso comes to have a gentle bitterness. The flavorful chocolate cream is made smoother by whipping the egg whites. Then the Bavarian cream, which is bitter and sour when hot, becomes just right when it cools.

Try this chocolate babaloa, which links Brazil and Japan, and experience the cool forest breeze of Brazil within the naturally rich flavor of this sweet!