The ways to enjoy udon noodles are inexhaustible. There are so many choices: kamaage (straight-from-the-pot) udon with its softly wafting wheat flavor; cold udon with its al dente consistency, broth, and scallions; oroshi udon with its distinctive flavor of grated daikon radish, udon served with luxurious tempura, kamatama udon with the soft flavor of raw egg; and the nostalgic taste of kitsune udon with deep-fried tofu.

Add salt water to the sifted flour and stir this mixture gently until the flour has completely absorbed the water. The amount of salt will need to be adjusted depending on the season. After the flour and seawater have been sufficiently mixed, slowly knead the soft ivory-colored dough, which starts to give off a delicate scent. Now, we will start to step on it.

Our cooks cover the dough with a large, thick plastic sheet and will step on it with their feet. They bend their waists as if performing on a noh stage and use their knees as springs. Then they fold and step on the dough twice to produce a luster. The subtle difference that remains in the color of the dough shows that the moisture has not yet been mixed evenly throughout. The beads of perspiration on the cooks’ foreheads begin to shine as they continue to fold and step and fold and step on the dough in order to get rid of this difference. “Try folding there,” cries the senior cook as he looks closely at the unevenness. If they step on the dough too forcefully, it makes the noodles break easily. If too much air gets into the dough, the noodles become crumbly. The cooks measure the elasticity and air bubbles in the dough by feeling the consistency of the dough through the soles of their feet and continue their steps. Also by stepping on it three times, the dough becomes smooth and lustrous. As they continue to step on it four and five times, it becomes smoother, springy, and shiny to produce a tight yet soft texture. When the dough is cut in order to rest overnight, you can see that the folded parts form into beautiful layers. 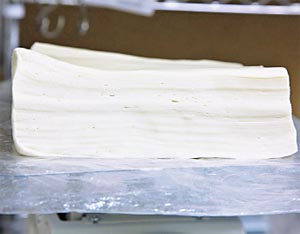 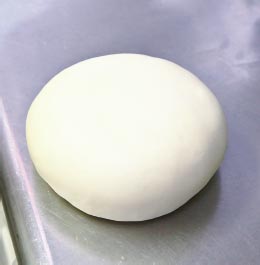 In the morning, the early-rising cooks wedge the dough in a spiral to further remove air from it and instantly knead it together. Then they begin to work on the broth, which is a combination of complex flavors. A large pot, filled with water and several long pieces of kombu (kelp) and small dried fish called iriko (dried young sardine) which were soaked overnight, is placed on the stove and heated for 20 minutes. Then the kombu is removed and the iriko begin to float to the surface of the water from the bottom of the pot, one by one. When the iriko rapidly rise, they form a school and come up together. As soon as the iriko all float up, they are completely removed from the water without a trace. Next, it is the turn of the mackerel (saba) and round herring (urume), which are placed in the hot water at once, and the white foam that forms is quickly removed. Then salmon (mejika) and bonito (katsuo) are placed in the water, adding to the fragrance of the broth. A pinch of salt is thrown in and the broth is strained with a cloth. This soup is a fragrant and flavorful amalgam of kombu and five different kinds of fish. You can thoroughly experience the crowning culture of this clear broth, the ultimate fish soup. 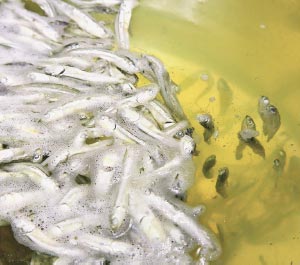 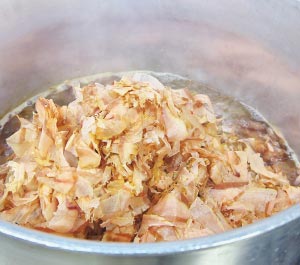 The cooks have also produced a soy sauce base for dipping sauce, which has rested for over a month and is cooked with sugar and mirin (an ingredient made of sake and sugar). Finally, our secret recipe dried plum is added to the soy sauce base, which is then combined with the broth. The saltiness of the dipping sauce as well as the sweet soy sauce base for cold and straight-from-the-pot noodles will permeate your palate. Please try some. The white, lustrous cold udon is another delicious way to enjoy these noodles. The al dente noodles in your mouth, the flavorful broth, the delicious scallions, and the rich fragrance of wheat spreading across your palate are all perfect, just like its name, “Perfect Udon.”

Hokushin wheat is well known for having the optimum flavor for udon and for now, nothing seems to surpass Shumei Natural Agriculture’s Hokushin wheat. It’s been twelve years since we began making handmade noodles; our cooks have come to truly understand the flour and the fish that go into making this dish. Their goal was to make the world’s greatest udon noodles, just like the masterpieces of the ancient artisans in our museum. We hope you enjoy our culinary art form, which has been twelve years in the making.